When you need the assistance of a Federal Attorney, it is highly advisable that you:

Hire someone who has extensive experience within the federal system

This fact would be important no matter what kind of lawyer you needed to hire. However, there are certain areas of the practice of law that require more experience and exposure than others, and Federal Criminal Defense is one of them.

As a former prosecutor with the US Army JAG Corps and the US Attorney’s Office, Federal Criminal Lawyer John L. Calcagni, III is well versed in the prosecution and defense of all types of federal criminal cases. This experience is invaluable in his ability to defend accused individuals on trial for federal crimes. 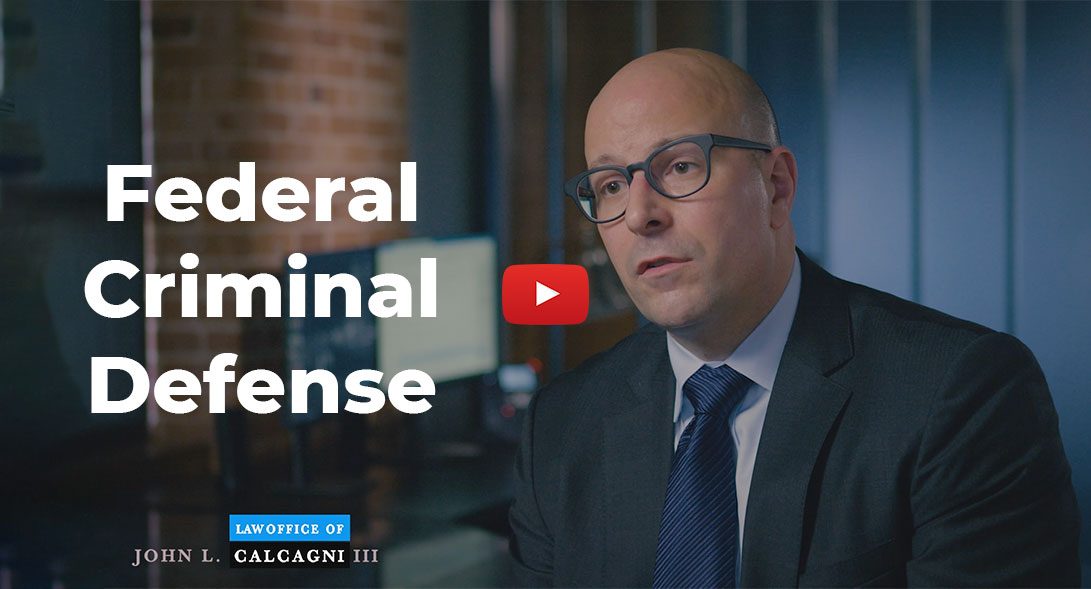 Common Federal Offenses
An example of a common federal charge may include:

Possessing, selling, manufacturing, importing, and trafficking large quantities of drugs may be charged as a federal crime.

If suspected of possessing, sending, receiving, or creating obscene materials depicting children in a sexual manner, you can be prosecuted in a federal court.

Organized crime activities involving violence or threats, robbery, money laundering, fraud, and any other illegal activities can be prosecuted in a federal court.

In addition to federal gun laws, all state governments and some local governments have their own laws that regulate firearms.

If you are under federal investigation or have been charged with a federal offense and would like to speak with an experienced Federal Attorney call John L. Calcagni, III today at (401) 351-5100 for a free consultation.

Except for those crimes that occur on federal land, a crime that is under the exclusive jurisdiction of federal prosecutors is generally an interstate crime. These crimes are more complex both factually and legally, and therefore, more difficult to design a criminal defense for. This is why the cost associated with a Federal Criminal Defense case can be higher than those on the state level, and this is also why indigent defendants are referred to the Federal Defender’s office.

Federal law enforcement officers operating in an undercover capacity performed a limited amount of surveillance on an individual they suspected of trafficking in both drugs and firearms. Believing the suspected trafficker just received a resupply of fentanyl, agents swarmed and raided his apartment without a warrant. Inside they discovered various quantities of heroin, cocaine and fentanyl, multiple firearms and a large amount of U.S. Currency. Agents seized and inventoried their findings. They also arrested and charged the man for the evidence discovered inside his home. The man quickly retained Federal Criminal Defense Lawyer, John L. Calcagni III, to defend him in this matter. Attorney Calcagni quickly pounced on the warrantless search of the man’s home. Police did not even attempt to secure the premises while they sought a search warrant. Because of their hasty actions, Attorney Calcagni targeted this case for a motion to suppress the physical items discovered and seized from inside the man’s apartment. To avoid this major oversight from becoming part of the public record, Attorney Calcagni successfully persuaded the government to dismiss this matter in its entirety and close the case without further prosecution. Based on this once-in-a-lifetime disposition, the man avoided prosecution in United States District Court, but was required to forfeit the large amount of money taken from his apartment.

Click on the links below to view details of more of our successful federal case results:

What makes a crime a federal offense?

In the most simplistic terms, a federal offense is a criminal act that is deemed illegal by the United State’s Federal Law. While most crimes committed in the United States are handled at the state level by a local prosecutor, a crime that is considered a federal offense follows prosecution procedures that are set by the United States Attorney’s Office. It is important to note that a crime committed at the federal level can also be considered a crime at the state level, which means you may face a state and federal charge for the same crime. To learn more about what classifies as a federal offense, contact criminal defense attorney John L. Calcagni for more information.

What does the federal court process and timeline look like?

A federal case always begins with a criminal complaint and then generally moves through the following steps listed below.

If you’d like more information check out the federal criminal case timeline and procedures.

In the meantime, here’s a brief overview of what happens in a federal criminal case or the federal court process:

This is the defendant’s first court appearance where they will learn more about their charges and possible penalties and choose a private or public counsel. This court appearance is when the terms of bail are also decided.

The arraignment is similar to the initial court appearance, where charges are again discussed, but this involves a plea entry. It is always advised to plead not guilty at your arraignment hearing.

These may include motions that can lead to dismissing charges or suppressing evidence. When working with a skilled federal criminal defense lawyer, a pretrial motion can possibly result in a dismissal of charges or your entire federal case may be dropped.

This may include an offer to the defendant to avoid trial by choosing a lesser sentence.

Evidence will be presented to a jury of twelve or a sole judge with no jury. Closing arguments are presented and a decision on guilt is made.

This occurs if the defendant is convicted.

An appeal must be filed within 10 days to challenge the conviction or sentence provided by the federal court.

What are examples of federal crimes?

Again, many crimes can be charged at both the state and federal levels. It’s important to work closely with a federal criminal defense attorney that has experience on the federal level if you’re charged with a crime that classifies as both a federal and state crime. To schedule a free consultation to discuss your federal case, contact our law firm today.

What should you do if you’re contacted by a Federal Agent?

The federal justice system differs from the state justice system in terms of the way the laws are established. Federal courts hear cases involving violations against the Constitution, where states hear cases involving violations against state laws. As mentioned above, one key difference between federal and state criminal cases is that the federal justice system has many more resources than on the state level. This means that if you’re facing a federal charge, you may be a suspect in an investigation that’s run by the FBI, the Bureau of Alcohol, Tobacco, Firearms, and Explosives, the DEA, the US Immigration Customs Enforcement, or the IRS. This means you need to take your federal criminal case very seriously and work with a federal defense lawyer that has substantial experience in federal law. Call us today to speak with a seasoned criminal defense attorney about your case.

What is the difference between being charged and being indicted?

Understanding the difference between a defendant being charged with a crime or indicted for a crime involves looking at who permits the arrest. If you’re arrested at the state level, the local prosecutor can bring a criminal charge against you. However, when it comes to a federal crime, a prosecutor will need to appear before a grand jury to establish probable cause to indict someone for a crime.

What happens if I’m summoned to appear before a Grand Jury?

If you are summoned to appear before the Grand Jury, you will need to discover the same information involved in being contacted by a federal agent. Knowing whether you are being considered as a witness or as a suspect is paramount to determining what information you will need to provide. In each instance, it is highly advisable that you have a federal attorney present and advising you every step of the way.

A federal defense lawyer can help you determine when to speak, and when it will be necessary to plead to the “5th Amendment” against incriminating yourself. Your criminal defense attorney, in some cases, will also be able to open a dialogue with the US prosecutors regarding plea agreements or a deal for immunity in return for your cooperation in their investigation.

For more about representation at a Grand Jury Subpoena contact us today to schedule a free consultation.

A federal defense attorney will not be cheap, and should not be someone who handles an occasional case on this level. You need to make sure that you get what you are paying for, and hire an attorney who is proficient at the federal level of criminal defense.

Do I need to hire a federal defense attorney?

Yes. Hiring a federal defense attorney is your best chance at a positive outcome. Federal charges should not be taken lightly. Penalties for federal crimes can completely change the course of your life and your federal defense lawyer will be the one person that has your best interest in mind.

Most of all, you want your criminal defense attorney to be well-versed in the federal court system, applicable Supreme Court Hearings, and federal sentencing procedures.

John L. Calcagni III has represented numerous clients in both state and federal courts and has a proven, winning track record. He understands the intricacies and differences between the state and federal judicial systems and how to represent you with your best interests and the best possible outcome in mind.

Federal criminal procedure and practice are also more demanding than what practitioners typically encounter in state court. For these reasons, it is vital that if charged with a federal crime in federal court that you obtain representation from a lawyer who has handled federal cases before and seen them through to favorable outcomes.

By choosing a lawyer inexperienced in federal court or with federal criminal defense cases, you are rolling the dice on the outcome, and gambling with both your freedom and future.

What are the steps in a Federal Drug Case?

Check out the Federal Drug Crimes Timeline to view all the parts of a federal drug case.

Call Now for a Free Consultation with a Federal Defense Lawyer