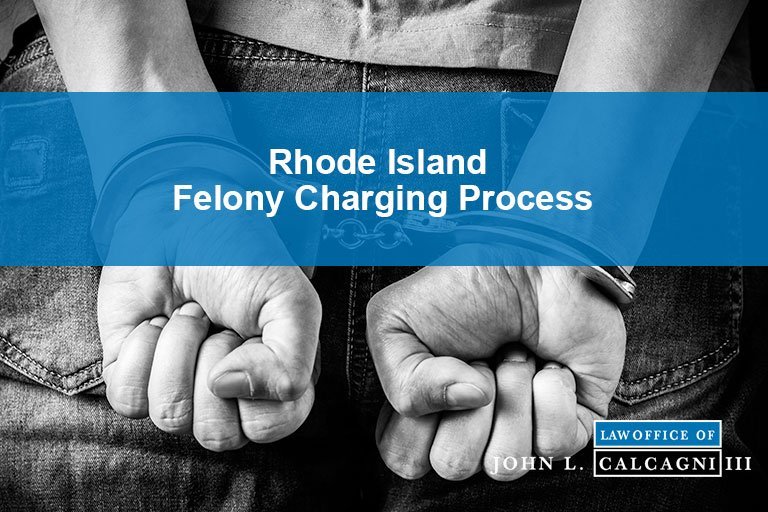 When a person is first charged and/or arrested for committing a felony in Rhode Island, the District Court often conducts an arraignment or initial appearance.  This is where the Court advises the defendant of his rights to remain silent and to legal counsel, and of the charged offenses.

The Court also decides the issue of bail by either ordering the defendant’s release on terms and conditions, or that he be held without bail.

Persons may be ordered held without bail if:

There are three ways felony charges may be filed in Superior Court:

The first is called the indictment process. This involves a member of the prosecution or Attorney General’s Office presenting some of its evidence to a group of individuals randomly selected from the community that composes a grand jury.

Grand jurors sit in secrecy to review this evidence in order to determine if there is probable cause or reason to be believe based on the specific facts, that a person committed one or more felony offenses.

The grand jury consists of 13 to 23 persons.  In order to return an indictment in Superior Court, at least 12 members of the grand jury must find probable cause to support a criminal charge.

If the required vote to indict exists, the grand jury returns a True Bill, resulting in an indictment filed in Superior Court charging a defendant with certain felonies.

If the required vote does not exist, the grand jury returns a No True Bill, and the case is closed with no further prosecution.

The second way that felony charges are filed in Superior Court is through what is known as the criminal information process.

Criminal information, like an indictment, is a document filed with the Superior Court that contains criminal charges or allegations against the defendant.

Before a criminal information may be filed, a representative of the Rhode Island Attorney General’s Office must review the evidence in support of the allegations.

This evidence is typically collected, assembled, and presented by the law enforcement agency that investigated the underlying offense(s).

The Attorney General will review the materials to determine if probable cause exists to support the charge(s).  If so, he or she will sign the criminal information and file it with the Superior Court, thereby formally charging a defendant with felonies.

If it is determined that probable cause does not exist, the Attorney General files a Notice of No Information, which discharges the defendant from any further prosecution.

3. Knowingly and voluntarily waiving indictment and the right to the criminal information process

The third and final way that felony charges may be filed in Superior Court is where a defendant knowingly and voluntarily waives both the right to indictment and the right to undergo the criminal information process.

A defendant may do so to accelerate the processing of his felony charges in the Rhode Island court system.

This typically occurs when the parties reach an agreement on a pretrial disposition before felony charges are elevated from District to Superior Court, or where the defendant, because of new felony charges initially filed in District Court, is accused of violating his Superior Court probation.