Possession of a controlled substance

This offense penalizes the conduct of knowingly or intentionally possessing a controlled substance. The penalties are listed according to the specific drug and quantity that was possessed.

Each drug is placed within one of the five Drug Schedules based upon its potential for abuse and medical treatment.

Legal elements for possession of a controlled substance

In order to be convicted of Possession of a Controlled Substance under Rhode Island criminal law, there must exist strong evidence of the following three legal elements: 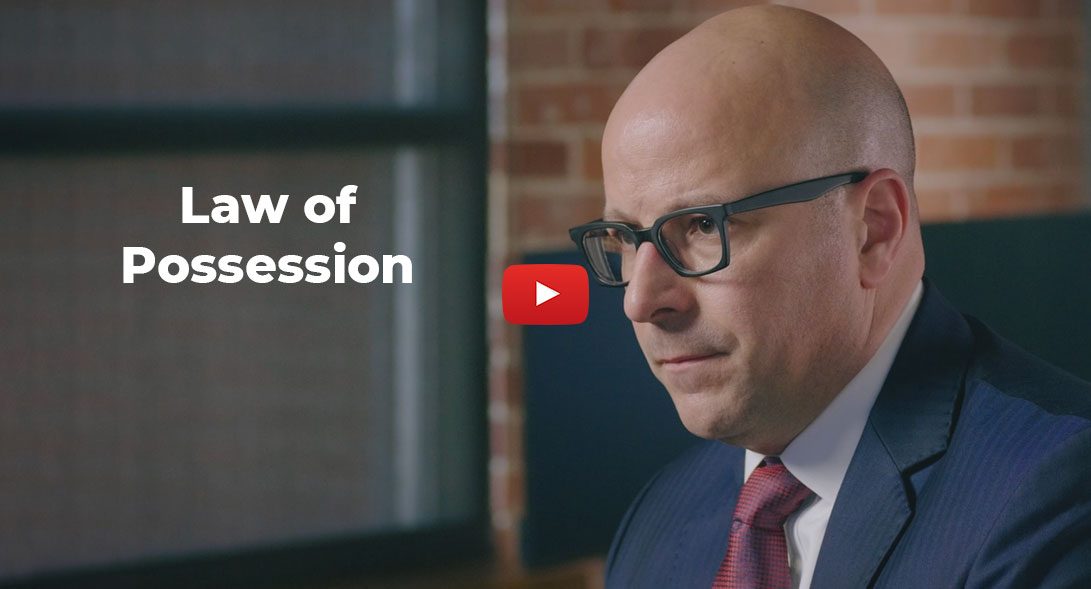 What is possession for purposes of possessing a controlled substance

Under Rhode Island criminal law, there are two ways to possess a controlled substance:

A person has actual possession of a drug if he or she has direct physical control over it, with knowledge of its narcotic or illegal drug nature. Absent physical or actual possession, a person may constructively possess and item.

One has constructive possession of a drug if he has knowledge of the substance and has both the power and intent to exercise dominion or control over it, either by himself or through a third person.

If two or more persons share actual or constructive possession of the substance, that is called joint possession.  Possession is not conditioned on the length of time that a person has an item under his or her control.

Knowing or conscious contact with an item, even though fleeting or momentary, is enough to prove the element of possession for the crime, Possession of a Controlled Substance.

What drugs are considered controlled substances

Under Rhode Island General Laws, Section 21-28-2.08, each drug is listed in a specified drug schedule.

There are many drugs listed in the schedules and are identified by their scientific name rather than the more well-known street names.

For example, some drugs contained in Schedules I and II are as follows:

Any form of these drugs is prohibited under Rhode Island criminal law.  This includes leaves, salts, optical and geometric isomers, salts of isomers, derivatives, extracts and more.

Though the drug may change form, the law targets and prohibits the chemical composition that makes up the substance.  Therefore, changing a drug’s physical properties does not enable you to avoid application of and prosecution under the Rhode Island drug laws.

However, possessing higher quantities of marijuana is a felony.  Upon a conviction for Possessing a Controlled Substance as a first offense, an offender may be sentenced to a term in prison of not more than three years.  Subsequent convictions will result in increased maximum sentences, which may be found at Rhode Island General Laws, Section 21-28-4.01.

Rhode Island criminal laws regarding illegal drugs also provide for a separate sentencing scheme when a specified controlled substance is possessed in a certain, specified quantity.

Specifically, Rhode Island General Laws, Section 21-28-4.01.1 provides a term of imprisonment up to 50 years for possessing any of following drugs at the following specified drug quantities:

Furthermore, Rhode Island General Laws, Section 21-28-4.01.2, provides a term of imprisonment of up life for possessing the following drugs at the following specified drug quantities:

The war on drugs is a never-ending fight.  From police in the streets to judges and prosecutors in the courtrooms, the government has many tools at its disposal to investigate, arrest and prosecute drug offenders.

Steep jail sentences are among these tools and are designed to both punish convicted offenders and deter others from becoming involved with illegal drugs.  If you are charged with a Rhode Island drug crime, you need an honest, experienced and effective attorney on your case.  Call Attorney John L. Calcagni III for a free consultation.

Get a free consultation today with an award-winning criminal defense attorney that is licensed in multiple state and federal jurisdictions.

Being charged with Drug Possession may have serious collateral consequences. These may include:

What happens when a drug possession offender has children?

These agencies may initiate independent investigations to consider the welfare of child or children who may have been exposed to a parent who is either abusing or dealing illegal drugs.

This could lead to removal of a child or children from the household or limiting or restricting parental rights.

A Drug Possession charge is a serious matter. Therefore, if you have been charged with Drug Possession, it is important to seek legal representation immediately in order to protect your rights and minimize the impact that a charge of his nature may have on your life.

What is the sentence for felony drug possession charges?

It’s important to remember that in most drug possession cases, offenses are classified as felonies. The only exception is a misdemeanor charge for simple possession of small quantities of marijuana. Rhode Island General Laws, Section § 21-28-4.01 states that you can face up to 50 years of imprisonment for felony possession charges of:

For possession that goes beyond the amounts listed above, you could face a life sentence.

It’s also important to keep in mind that consequences can go beyond jail time and expensive fines. If you’re charged and convicted of drug possession, you may be denied:

What is the sentence for misdemeanor drug possession charges?

As mentioned above, most drug offenses are classified as felonies, but the outlier is possession of small quantities of marijuana (more than 1 ounce, but less than 1 kilogram), which will result in a misdemeanor charge. These penalties can include up to 1 year in jail and $500 in fines.

(ii) More than one ounce (1 oz.) of a controlled substance classified in schedule I as marijuana is guilty of a misdemeanor, except for those persons subject to (a)(1), and, upon conviction, may be imprisoned for not more than one year, or fined not less than two hundred dollars ($200) nor more than five hundred dollars ($500), or both.

While some may believe that a simple possession charge of marijuana is minor, you can still face time in jail as well as various harsh consequences for having a drug conviction on your record. This is why you need to work closely with a Rhode Island drug possession lawyer, even if you’re only facing a misdemeanor drug possession charge. Call the Law Office of John L. Calcagni today to learn more about how a drug possession attorney can assist you.

Is it possible to beat drug possession charges?

Do I need to hire a Rhode Island drug possession lawyer?

If you have been charged with drug possession and need expert legal representation, contact the Rhode Island Drug Defense Attorneys at the Law Office of John L. Calcagni III at (401) 351-5100 to schedule a free consultation.