7 Common Myths and Misconceptions About the Criminal Justice System 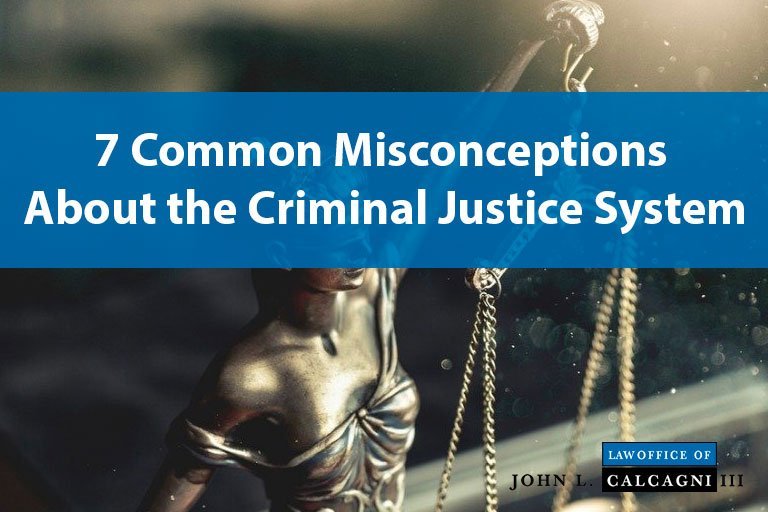 Over the years, America has grown increasingly fascinated by crime and the criminal justice system.  NPR’s Serial helped spawn a wave of true-crime podcasts.  Netflix’s Making a Murderer, and HBO’s The Jinx, created a generation of armchair detectives.  Since then, there have been countless retellings of true crime stories, including O.J. Simpson, Gypsy Rose Blanchard, and the case of “Dirty John.”  Furthermore, shows like Law & Order, CSI, and others have changed the average American’s understanding of the legal system. But despite all the attention this genre has gotten, many people still have misconceptions about the law.  Here are some of the most common myths and misconceptions about our criminal justice system.

(1) Police Must Identify Themselves:

Somewhere along the way, a myth developed that police must identify themselves as law enforcement, if asked.  Not only is this not true, it defies logic.  If this were the case, sting operations and undercover work would be impossible.  Most criminal enterprises operate with some level of secrecy and use methods to thwart police investigations and prosecutions.  If officers were forced to identify themselves while working in an undercover capacity, it would make it very difficult to detect and investigate certain criminal activity.  Part of this myth is connected to the concept of entrapment, which many people also do not understand.  Entrapment can be used as a defense to criminal charges when law enforcement uses coercion or other overbearing tactics, such as threats or harassment to induce someone into committing a crime.  However, simply offering a defendant the opportunity to commit a crime does not constitute entrapment.

There is not a constitutionally protected right to a phone call following an arrest.  However, many jurisdictions allow you to place a call after your arrest.  It can also depend on the discretion of the arresting officer.  So, being able to place a call within a certain period of time, or making any call whatsoever, is not a guaranteed right, contrary to popular belief.  It should be noted that if you are entitled to any calls, it is possible that officers will make note of the name and number of the person(s) you contact and may also be listening to your conversation.  Similarly, law enforcement and prosecutors are making use of cellphones and their stored content more and more to find incriminating information.  If you are arrested, your cell phone will likely be confiscated.  If officers ask for the code to access your phone, it is in your best interest to say no, regardless of whether you believe there is anything incriminating on the device.

(3) If I’m Not Read My Miranda Rights, the Case is Dismissed:

While many people may have become more educated about their Miranda Rights thanks to shows like Law and Order or NCIS, there are nuances as to how these rights work.  These rights, which include the right to remain silent and the right to an attorney, are fundamental to our criminal justice system and constitutional framework. While it is possible that a suspect who has not been informed of his Miranda Rights may ultimately have his case dismissed, it is not likely based on that fact alone.  It is important to note that Miranda is only applied after a suspect is taken into custody and who are subjected to questioning by police.  Therefore, any statements made prior to arrest may be used against you as well as spontaneous statements, even after a rights warning.

If you have already been acquitted of a crime, the 5th Amendment prevents the government from trying and retrying a case until it is successful.  However, there are some big exceptions to this rule.  First, double jeopardy only applies if a jury has either convicted or acquitted someone of a particular crime.  Second, a defendant can be tried, convicted, and sentenced for the same underlying offense in both state and federal courts.  Third, the state can charge a defendant with both a crime and conspiracy to commit the crime, which, in effect, gives prosecutors two opportunities for a conviction.  The 1999 movie Double Jeopardy, starring Ashley Judd and Tommy Lee Jones also illustrates another exception to this rule.  The main character is convicted of killing her husband, who is later found to be alive.  Based on the script’s interpretation of double jeopardy, the main character believes she is now free to murder her husband in broad daylight in a public place.  However, if she were to do so, she would not be free from punishment because the “first” murder never really occurred, and the second (real murder) would be taking place at another place and time.  While it may make for an entertaining plot device, double jeopardy would not apply here either.

While this idea may not be derived from TV shows or movies, this is a very real misconception amongst many people.  Prosecutors are the ones who decide to file or dismiss charges.  Even if a complaining witness (aka: victim) reports a crime to police, police execute an arrest, and a court has found that probable cause exists to support the arrest, whether to charge a defendant for a crime rests in the prosecutor’s hands.  Therefore, if a complaining witness decides he or she does not want a defendant charged, the state does not have to abide by the complainant’s wishes and may still proceed with the prosecution.  This is where a key distinction lies between civil and criminal cases.  Crimes are considered offenses against the state, or society as a whole.  If a defendant commits murder, the murder is considered an offense against society.  Therefore, crimes against the state are prosecuted by the state, and the prosecutor (not the victim) files the case in court as a representative of the state.  In a civil case, it is the wronged party that would file the case.

(6) Guilty Pleas are Proof of Guilt:

Certainly, a defendant may plead guilty to a crime because he or she is actually responsible for the offense charged.  Sadly, however, that is not always the case.  In fact, approximately 94% of felony convictions at the state level and 97% at the federal level are the result of plea bargains.  And the estimates for misdemeanor convictions runs even higher.  There are many contributing factors that help to explain this phenomenon, but quite often it is the result of the financial burden of taking a case to trial, and the fear of being unsuccessful.  Quite often, prosecutors now bring multiple counts for a single incident, which exponentially increases the risk of a conviction and significant sentence if convicted after trial.  Similarly, there is a trend of overcriminalization in America, allowing prosecutors to prosecute more easily and creatively.  When faced with what feels like insurmountable odds, many defendants feel pressured to cut their losses and take a plea deal.  Because of plea bargains, the court system is able to quickly process millions of criminal cases each year.  It also means that prosecutors are able to convict defendants who may not be factually guilty or whose crimes result from mental illness, addiction, or poverty.

(7) Your Attorney is in Constant Communication with Prosecutors:

While fictionalized court procedurals, like Law and Order, may make it seem as if criminal cases are investigated, prosecuted, and resolved within a few days’ time, this is often not the case.  A typical misdemeanor can take anywhere from 3-6 months to resolve after charges are filed.  Felony charges can take far longer.  During this period of time, defendants will often have multiple pre-trial conferences or hearings, but there will also be a lot of time spent in a holding pattern, where defense attorneys are not typically in communication with prosecutors.  This does not mean that your attorney is neglecting your case.  Often, they are spending time between hearings by gathering, reviewing and analyzing discovery; conducting any necessary investigations, and researching applicable law.  Understandably, anyone accused of a crime wants the case to be resolved as quickly as possible.  However, it is often a lengthy process, one with lots of “dead time,” so defendants and their families will often need to exercise patience.  If you have an experienced criminal defense attorney will always be advocating on your behalf and will update you on any progress as it happens.  Moreover, the longer a case takes, often the better it is for the defendant.   Lastly, getting positive results in a criminal case takes time.

If you or someone you love is charged with a crime, call the Rhode Island Criminal Defense Lawyers of the Law Office of John L. Calcagni III, Inc. today at (401) 351-5100 for a free consultation.  We have a proven track record, spanning more than a decade, of successfully defending misdemeanors and felonies at both the state and federal levels.