Classes of Persons Federally Prohibited from Possessing a Firearm 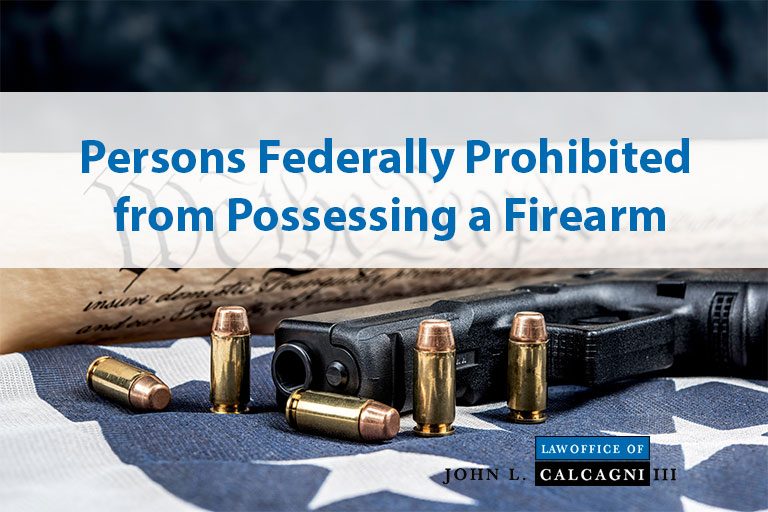 Firearm ownership is embodied in the 2nd Amendment to the U.S. Constitution. However, individual states are empowered to enact their own laws regulating the possession and ownership of firearms and ammunition.

The rights to own or possess these items is not absolute. For example, when seeking to purchase a firearm in Rhode Island (and other states), most buyers must complete approval applications with state and federal authorities.

If either the state or federal government disapproves of the firearm purchase, the application will be denied and buyer precluded from acquiring the weapon. Because of the two-tier approval process, a purchaser of the firearm must be legally eligible under both state and federal law.

Title 18 of the United States Code, Section 922(g), makes it unlawful for certain classes of person to ship, transport, possess, or receive in interstate or foreign commerce any firearms or ammunition. The term ‘firearm’ is defined by federal law to include any weapon, the frame or receiver of any such weapon, a firearm muffler or silencer, or any destructive device.

Firearms include a weapon that will, is designed to or may readily be converted to expel a projectile by the action of an explosive. The focus of this article is to outline the classes of persons who cannot ship, transport, possess, or receive any firearms or ammunition under federal law.

Classes of persons prohibited to possess a firearm by federal law

There are nine classes of persons who are prohibited by federal law from possessing a firearm or ammunition.

The first class consists of individuals who have been convicted of a crime punishable by imprisonment for any term exceeding one year.

These are typically referred to as felony offenders, and under no circumstances may a convicted person own or possess a firearm or ammunition.

The second class are those who have fled from any state to avoid prosecution for a crime or to avoid giving testimony in any criminal proceeding.

These individuals have warrants for their arrest and are referred to as fugitives from justice.

The third class are unlawful users of or those addicted to any controlled substances.

This broad category applied to marijuana, even sanctioned for use under state law.

The fourth class are individuals who have been pronounced through a formal judgment as a mental defective or previously committed to a mental institution.

The fifth class prohibits any person that is deemed not to be a citizen of the United States.

The sixth class encompasses persons who has been discharged under dishonorable conditions from any branch of the Armed Forces.

The seventh class consists of United States Citizens who have renounced their citizenship.

The eighth class of persons prohibited are those individuals who are subject to any form of a domestic restraining order.

The ninth and last class of individuals are those who have been convicted in any court of a misdemeanor crime for domestic violence.

Possessing a firearm or ammunition in violation of federal law can have grave consequences. Those convicted in federal court will acquire a federal conviction. As for punishment, convicted offenders face up to 15 years in prison, followed by a term of supervised release, and a maximum allowable fine of $250,000.

If you have questions or concerns about classes of persons prohibited from possessing a firearm or ammunition or if you have been charged by federal authorities with violating 18 U.S.C. § 922 (g), contact Federal Firearms Defense Lawyer John L. Calcagni, III for a free consultation at (401) 351-5100.