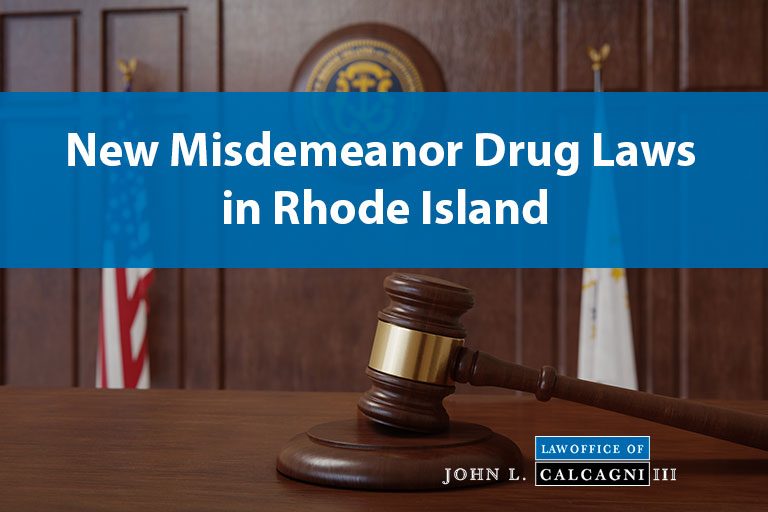 In Rhode Island, when a person is arrested and charged for a violation of the Controlled Substances Act, there are several penalties that may be imposed such as jail, probation, and/or fines.  For many years, the possession of any controlled substance, except for a small amount of marijuana, was considered a felony under Rhode Island Criminal Law.  Times have changed, and so has the law.

In February 2021, the Rhode Island Legislature amended the state’s criminal drug laws by reducing what was formerly considered a felony to a misdemeanor. As of July 9, 2021, under new Rhode Island criminal law, a person convicted of simple possession of a controlled substance classified in any of the five drug schedules, excluding marijuana, is now guilty of a misdemeanor, rather than a felony.

Under previous laws, a misdemeanor offense was defined as one punishable by not more than one year in prison and/or a $1000 fine.

The new misdemeanor law, designed to reduce punishments for possessing a controlled substance, provides for a punishment of up to two years in prison and/or a $5000 fine.

The new law also provides that the Superior Court shall maintain jurisdiction over this new category of misdemeanor crimes.  Traditionally, the District Court has always maintained jurisdiction over misdemeanor crimes.  It will continue to do so for those drug crimes punishable by up to one year in prison, such as the criminal possession of marijuana.  The new misdemeanor drug offenses, however, shall be prosecuted in Superior Court.

The new drug law provides that 10 grams or less of certain drugs are now considered a misdemeanor, punishable by up to two years in prison and/or a $5000 fine.

These drugs include but are not limited to:

Again, possession of these drugs in any quantity was always considered a felony offense.

Why is Rhode Island Changing the Law?

The new law is aimed at reducing the impact that persons aggrieved by substance abuse will suffer prolonged, harsh collateral consequences resulting from felony convictions that limit future employment, education, housing, and other opportunities.  The new law also seeks to promote reduced criminal punishment for drug users and promote their treatment and rehabilitation.

If you or someone you know has been charged with Simple Possession of a Controlled Substance in Rhode Island, contact the criminal defense Law Office of John L. Calcagni, III today at (401) 351-5100 for a free consultation.