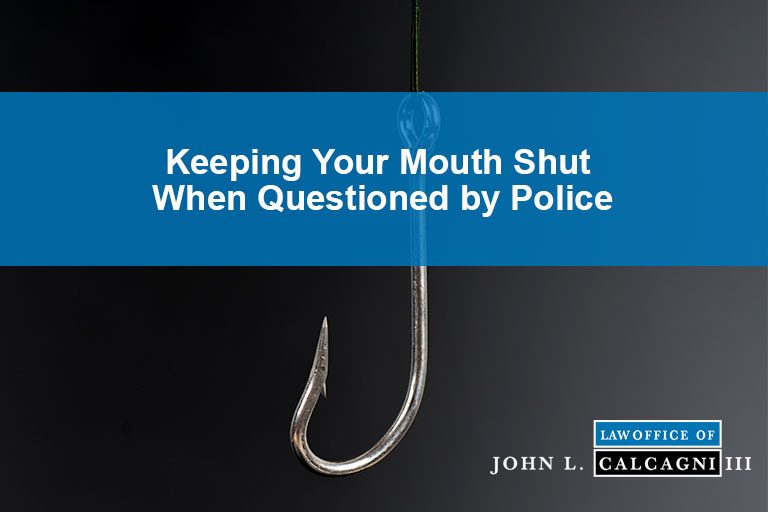 This article is aimed at warning you that words have consequences, particularly when charged with or suspected of a crime.  The adage “loose lips sink ships” was developed during World War II by the United States Office of War Information as a way of warning citizens and members of the military to be careful of what they say, as enemy spies could be listening and use the information for wartime advances against America.  This adage also holds true in criminal law.

My partner has a plaque in his office with a fish mounted on it.  The fish has a large hook in its mouth.   Beneath the fish lies a small placard that reads “if I had only kept my mouth shut.”   The message is that had the fish kept its mouth shut, it would not have been hooked, killed, and mounted on the plaque.

The message is clear and applies to all persons who are confronted or questioned by police.   The Miranda advisement, though not always given by police – even when required – that anything you can and say will be used against you, is very true.

I recently had the occasion to represent a young man accused of child pornography offenses.  When police went to his home to execute a search warrant, granted on the basis of probable cause to believe the was distributing child pornographic materials to others via the internet, police questioned him.

During questioning, the man admitted to molesting a child family member.  He further admitted to video recording the event and sharing it with others.

Without knowing any better, the man admitted to committing three crimes (in addition to possessing child pornography):

As the investigation into the admissions progressed, the alleged child victim did not confirm the man’s statement to the police.

Further, the alleged video he admitted to creating was never discovered.  As such, he was never charged with molestation or producing child pornography.   However, at the man’s sentencing hearing for his charged and admitted child pornography offenses, the government and sentencing judge were focused primarily on the man’s statements to police that he committed crimes with which he was not charged and for which there was no supporting evidence.

The man’s statements alone influenced the government to recommend a jail sentence of 15 years for conduct that would normally call for a single-digit jail term.

The court was particularly troubled by the man’s statements to the police, and as such, imposed a sentence of 10 years. This sentence will haunt me for the remainder of my career, especially considering the man’s young age, lack of criminal record, and the fact that he claimed his statements to police were both untrue and designed to shield another family member from potential criminal prosecution.

It is important to be reminded that police always want to question those suspected of a crime. If given the chance, police will always conduct the questioning.

Contrary to what some believe, the aim is not to obtain the truth. After all, who really knows what the truth is about anything?

Unless you saw, heard, or experienced an event yourself, the truth is a fleeting ideal that we often seek, but never really discover.  In truth, the truth is what we choose to believe, unless of course, as stated above, we have personally experienced the subject matter.

The job of law enforcement

The job of law enforcement is to collect evidence to support alleged criminal conduct.  This is why what you tell police can and will be used against you.

It is important to know that the Miranda rights advisements are not required to be given in each and every police encounter.

The rights advisements are only required if the suspect is in custody and subject to interrogation.  These terms have been subjected to extensive interpretation over the years.

It is also important to know that the police know the limits of the law more so than the average citizen.  This means when it comes to questioning, police know when Miranda is required and when it is not.

As such, police may deliberately choose to question a suspect at a time or in a setting when they know the Miranda rights advisement is not legally required.

After all, simply giving the advisement may dissuade people from speaking to the police.  Since the objective is to question the subject, it is in the interest of police to pose questions in an environment where the law does not require the Miranda rights advisement.

Police are permitted to lie

Experienced defense attorneys know this information and are all too familiar with the unwitting client who is duped by police into making incriminating statements that are akin to the fatal hook in the fish’s mouth.  The bottom line, all suspects are best served by keeping their mouths shut when confronted or questioned by police.

Speaking with police is not always a bad idea

As a defense lawyer, I often give my clients tactical advice to speak with the police.  However, I would never advise anyone suspected of a crime to do so without the presence and assistance of experienced defense counsel.

Speaking with the police can have advantages

However, doing so may also have disadvantages that could be costly to you in terms of being arrested, charged with a crime, convicted of that crime based on your own words, and potentially jailed for a long period of time, as the unfortunate young man described above.

If confronted or questioned by police

If confronted or questioned by police, you are encouraged to be polite, professional, and firm.   Decline to speak with police or answer questions about anything until you have consulted with an attorney.

If you are suspected or charged with a crime and have questions about speaking with police, keep your mouth shut and call a lawyer immediately. The criminal defense attorneys at the Law Office of John L. Calcagni III are available today for a free consultation.   Contact us at (401) 351-5100