Questionable Constitutionality of the Warrantless Use of Pole Camera 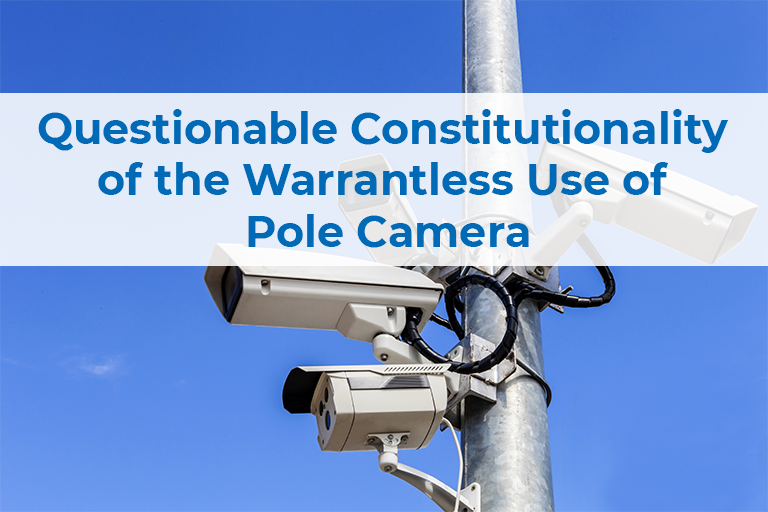 The Fourth Amendment protects us against unreasonable searches and seizures. The purpose of this constitutional provision is to safeguard the privacy and security of individuals against government intrusions into areas where we have a reasonable expectation of privacy.  This protection extends to places like our homes, vehicles, locked containers, and more.  With the advent and continuous development of modern technology, the areas and items to which we have a legally recognized expectation of privacy are expanding, giving new hope to criminal defense lawyers, who serve as guardians of individual liberty interests invaded by governmental actions.

For example, in 2012, the United States Supreme Court in United States v. Jones, 565 U.S. 400, held that attaching a GPS tracking device to a vehicle and using the device to track the vehicle’s movement is a search that implicates the warrant requirement of the Fourth Amendment.

In 2014, the Court held in Riley v. California, 573 U.S. 373, that police need a search warrant in order to search the digital contents of a cellphone.

In 2018, the Supreme Court said in Carpenter v. United States, 138 S. Ct. 2206, that a cell phone subscriber has a reasonable expectation of privacy in cell site location information stored by the cellular provider, which requires the government to obtain a search warrant before seeking such information from the provider.

These cases have been relied upon to challenge the warrantless use of pole cameras by law enforcement during the course of criminal investigations.

In June 2019, a courageous trial judge sitting on the United District Court for the District of Massachusetts was presented with the question of whether the use of a camera affixed to a utility pole across from a suspect’s home in order to capture audio and video surveillance of that person constitutes a search under the Fourth Amendment.

After the trial judge issued his well-thought decision to suppress pole camera footage in that case, the government unsurprisingly appealed to the U.S. Court of Appeals for the First Circuit, which reversed the lower court’s decision.  The appellate court said that pole cameras are a conventional surveillance tool and a species of surveillance security cameras.

Thus, the information obtained from the pole cameras did not violate an expectation of privacy and was not a search under the Fourth Amendment.  This issue remains ripe for challenge in other federal circuit courts around the country, and more so, in state courts.

Massachusetts continues to lead the way with its increased protection of civil liberties, often diverging from federal law.

On August 6, 2020, the Supreme Judicial Court in Commonwealth v. Mora analyzed the privacy question of pole camera use under Article 14 of the Massachusetts Declaration of Rights, which provides greater protection than its federal counterpart, the Fourth Amendment to the U.S. Constitution.

The Mora court reasoned that the analysis turns on whether the surveillance was so targeted and extensive that the data it generated exposed otherwise unknowable details of a person’s life.

The court held that the combination of duration and aggregation in the targeted surveillance affects a person’s reasonable expectation of privacy when the duration of digital surveillance drastically exceeds what would have been possible with traditional law enforcement methods.

Under these conditions, a warrant is required and, in the absence of a warrant, the pole camera footage may be suppressed as evidence.

In Mora, for uninterrupted periods of five months and two months, respectively, pole cameras were targeted at two residences.  These cameras videotaped not only the intentionally targeted defendants, but also every person who visited their homes and every activity that took place in the immediate vicinity.

Because of the focused and prolonged nature of this pole camera surveillance, investigators were able to uncover the defendants’ private behaviors, patterns, and associations.

The Court concluded that that the warrantless surveillance under these circumstances was a search governed by the Fourth Amendment and stated that, in the future, this kind of prolonged surveillance requires a warrant based on probable cause.

The above-referenced two recent pole camera cases are examples that the frontier of our privacy rights and the rules the government must follow in order to respect them continues to evolve.  Continued litigation by defendants and creative defense lawyers will help shape the future of the criminal procedure landscape.

If you are a defendant in a case involving pole camera evidence, call the Law Office of John L. Calcagni III, Inc. for a free consultation at (401) 351-5100 or email.