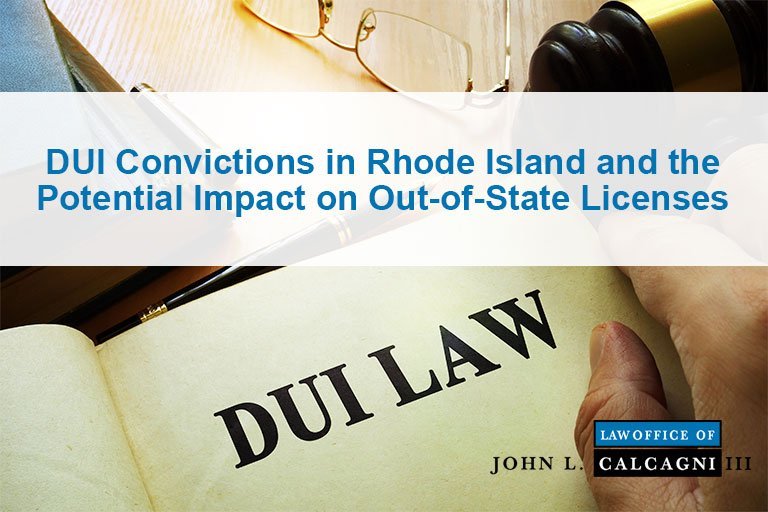 Under Rhode Island Law, a DUI conviction carries heavy penalties which can cause financial hardship as well as restrictions on a person’s ability to drive. If a person is convicted for a first offense DUI in Rhode Island, whether alcohol or drug-related, that person will be guilty of a misdemeanor and the penalties imposed correspond with the person’s blood alcohol content (BAC) or the presence of a controlled substance as shown by a chemical analysis of their blood, urine, or bodily fluids.

Generally, without the presence of extenuating circumstances, a first offense DUI of alcohol or drugs is punishable by:

As for the person’s license, it will be suspended for a minimum of 30 days and up to 180 days and the person may be prohibited from driving without the installation of an ignition interlock system and or drug testing of the blood and/or urine.

The court has the discretion to eliminate the ignition interlock requirement where a DUI is based upon drugs only and alternatively, impose mandatory drug testing.

If the DUI is based upon both drugs and alcohol, the court may also require the ignition interlock with or without drug testing.

Lastly, if the person installs an ignition interlock system and/or undergoes drug testing as ordered by the court, it will reduce the mandatory license suspension period.

The Rhode Island Department of Motor Vehicles (DMV) will enter a suspension into the national system, which places other states and their registries on notice of the Rhode Island suspension.

Many states, upon learning of this information, will impose a license suspension upon their licensed motorists, in addition to any penalties imposed by Rhode Island.

The suspension under Connecticut law will be for one year, regardless of the duration of the Rhode Island suspension.

Connecticut will also require your vehicle to be equipped with an ignition interlock system before you can have your driving privileges in Connecticut reinstated and may also require completion of a driver’s retraining course.

These Connecticut penalties are in addition to the penalties imposed in Rhode Island for a DUI conviction.

However, this only occurs after a conviction and not while the case is pending. The only exception is if the person’s driving privileges are suspended by the Rhode Island Traffic Tribunal for Refusal to Submit to a Chemical Breath Test.

In this instance, the Massachusetts Registry of Motor Vehicles (RMV) will automatically suspend the motorist’s license for 180 days, effective immediately upon notification of the Rhode Island chemical test refusal.  This 180-day suspension is consistent with Massachusetts police for similar offenders in the Commonwealth.

The indefinite MA license revocation for the Rhode Island DUI conviction will only be lifted upon providing the RMV with “proof of findings” of out-of-state violation.

Once the Rhode Island DUI is added to the RMV system, Massachusetts will administratively impose its own license suspension.

For a first offense, the suspension will be for one year.  This period may be reduced by providing proof to the RMV that all obligations imposed by the Rhode Island DUI conviction have been satisfied and the motorist’s Ocean State driving privileges have been restored.

Any Massachusetts motorist with two or more DUI convictions must install an ignition interlock system and may be required to complete an alcohol education program.

Maneuvering your way through the laws of two states can be confusing and challenging.  However, if you are charged with a DUI in Rhode Island and are an out-of-state motorist, it is important to hire an experienced DUI lawyer to help you understand how a Rhode Island conviction may impact your driving privileges and license. To consult with attorneys experienced with representing out-of-state motorists charged with DUI in Rhode Island, contact the Law Office of John L. Calcagni III today by email or call at (401) 351-5100.