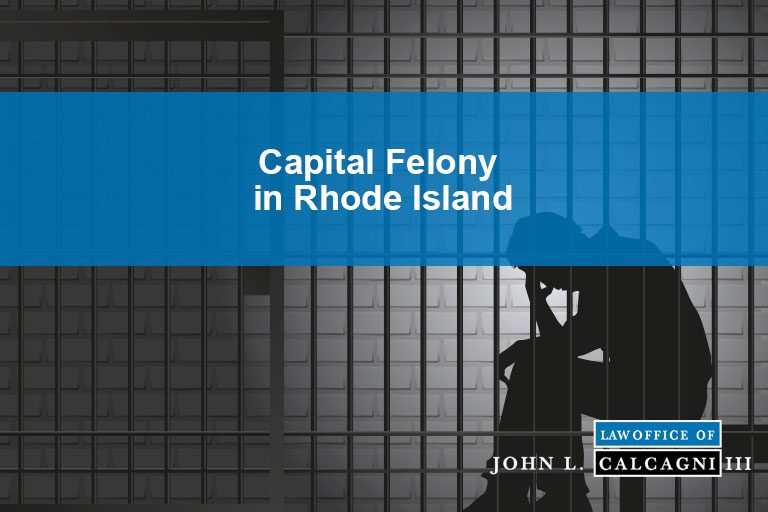 What is a capital felony?

When learning of the two different categories of criminal offenses, you may know that a misdemeanor is widely considered a minor crime whereas a felony is a major or more serious crime. A capital felony is the most severe criminal charge, someone, under the law, as they are punishable by life imprisonment.

Examples of capital felonies include:

What are the penalties for a capital felony?

Judges deciding on potential penalties for a defendant convicted of a capital felony in Rhode Island will consider many factors such as the defendant’s personal background and characteristics such as education level, employment history, mental health history, physical disabilities, substance abuse history, immigration status, family background and circumstances, military history and more.

Judges will also consider the defendant’s criminal history (if any), acceptance of responsibility, remorse towards the victim, and the impact on the victim(s) by the crime. All of these factors will impact the duration and other terms of a sentence imposed for a capital felony conviction.

Will you go to jail if convicted of a capital felony?

However, life in prison is a potential punishment for capital felony convictions. While the law recognizes alternative penalties to jail time, such as community service, treatment programs, fines, probation, and suspected sentences, the vast majority of offenders who are convicted of a capital felony will face a punishment of actual time in prison, which may be any terms of years up to and including life imprisonment.

What is the max jail sentence if convicted of a capital felony in Rhode Island?

Should I hire an attorney to defend my case?

If you are charged with any crime, and most especially a capital felon, hiring an experienced Rhode Island criminal defense attorney is your best chance for a successful outcome. Because capital felonies are the most serious crimes known to the law, the prosecution will not hesitate to seek against those accused harsh punishments.

There is no question that facing a capital felony charge can be a terrifying experience, especially for a first-time offender. A Rhode Island criminal defense lawyer can help you understand the extent of your charges and guide you through each step of the criminal justice process. A skilled capital felony defense lawyer will be able to present options and explore your case with a fresh perspective.

What are the possible defenses?

The defense strategy that your Rhode Island criminal defense lawyer formulates will depend on your specific charges and the surrounding circumstances. Each charge needs to be thoroughly examined, investigated, and analyzed before developing a criminal defense.  No two cases or capital felony charges are the same, so it is crucial for your lawyer to explore every inch of your case to create a unique, aggressive, and powerful defense strategy.

How do I find a lawyer with experience defending capital cases in Rhode Island?