COVID-19 As Basis For Bail 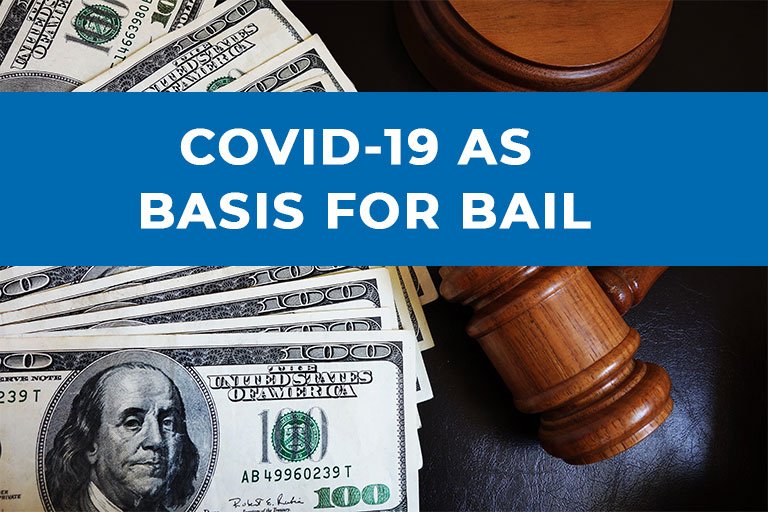 As of March 17, 2020, COVID-19 has infected at least 200,000 people worldwide, and has led to over 10,000 deaths.[1]  Within the United States there are 15,219 known infections and 201 deaths.[2]  Sadly, these numbers continue to grow rapidly.  As of March 20, 2020, Massachusetts is reporting 328 cases of the virus, Rhode Island has 44, and Connecticut is reporting 159 cases, including three deaths.[3]  Federal and state governments continue to enact more stringent policies as each day goes by, desperate to curtail the spread of this virus.  These measures have also upended the criminal justice system, with the closing of federal and many state court systems.  Prosecutors have also been forced to reevaluate bail conditions, in an effort to place public health over concerns regarding public safety.

Conditions of pretrial confinement create the perfect environment for the rapid transmission of a contagious disease.  Inmates cycle in and out of the Bureau of Prisons from all over the country, even the world, and staff members leave and return to the facility on a daily basis.  Scientists have learned that COVID-19’s incubation may take up to 14 days for symptoms to appear, and that many hosts of the virus are actually asymptomatic.  This means that staff members and new inmates cycling into a particular detention facility could unknowingly expose the entire prison population to the virus.

The conditions inherent to detention facilities also exponentially raise the risk of infection and need for hospitalization.  Inmates are housed in large numbers, within very close proximity of one another.  Further, incarcerated populations experience poorer health conditions than the general population, and medical care is already limited in most detention centers.[4]  Detention facilities are often less than sanitary and inmates don’t have the same opportunity to practice good hygiene or proactive measures to keep themselves as safe as those on the outside are able to do.

Based on these unprecedented conditions, releasing as many defendants as practicable on bail may be a critical step towards preventing the rapid spread of this virus throughout our prison populations.  An effort to narrow bail conditions could prevent a great number of detainees from needing simultaneous hospitalizations, which would put enormous stress on our healthcare system.  In lieu of holding a defendant in pretrial custody, conditions of release such as personal recognizance, electronic monitoring, or home detention, should be requested at this time.

Under 18 U.S.C. § 3142(f) , a bail hearing may be reopened at any time before trial where new information exists that was not known at the time of the first hearing and such information has a “material bearing” on the issues of risk of flight and danger to the community.  The threat posed by COVID-19 is new information that bears on any risk of flight or danger a defendant may pose.

Furthermore, the Bail Reform Act provides for the “temporary release” of a person in pretrial custody “to the extent that the judicial officer determines such release to be necessary for preparation of the person’s defense or for another compelling reason.”  (18 U.S.C.A. § 3142(i)).

Preventing the spread of COVID-19 alone may be sufficient to meet this standard, but it is particularly applicable to those suffering from pre-existing health issues.  Health complications putting one at greater risk of serious illness or death includes but is not limited to, high blood pressure, heart conditions, diabetes, respiratory diseases, the elderly, and those who are immune-compromised.

The existence and spread of COVID-19 does not mean that all defendants should seek a reconsideration of bail, or that the Court will grant bail.   Cases and defendants should be considered individually on their facts and merits.  After all, the courts are trying to reduce the amount of daily business, not increase it with a flood of bail requests.   Also, the general policy concerns surrounding bail, such as flight risk and danger to the community, still remain in force.   The rebuttal presumption against bail in federal drug cases also remains in effect.   Overcoming these challenges at a bail hearing, particularly on a request for reconsideration, will be challenging, but given the right set of compelling facts, is not impossible.

If you or someone you know is in pretrial custody or awaiting a bail hearing, the spread of COVID-19 may warrant reconsideration of you bail conditions.  Due to the unprecedented impact of this virus, many judges are taking measures to reduce prison populations if a defendant can establish under 18 U.S.C. § 3142 their release is warranted in light of this pandemic.  Court rulings throughout the country differ, and individual District Court rulings will vary on case-by-case and judge-by-judge basis.   If you think your case warrants a motion for reconsideration of bail, please call the Law Office of John L. Calcagni, III at 401-351-5100 today for a free consultation.